Time to give a shout out to all the authors who allowed me to showcase their fabulous works this year, and for their continued support of this blog. 2015 was a pretty fabulous year all around, both for them and for myself too. While the below is merely a small sampling of all the fabulous books that came out from the various publishers my author friends and colleagues write for, it was a busy year for us all it appears. So let’s take one last look at what came to A Great New Read in 2015 – and here’s hoping 2016 is just as productive.

This interview is unique in that it is not only from Cameron Skye, but from the character Jess in Fallen Angel: A Mafia Romance. Since the book is based off of events of Cameron’s life, they too would be her answers if she were interviewed as well.

What is your idea of perfect happiness?

Getting to the point where I can accept the truth there is no perfect happiness. To finally love and accept myself and my past mistakes. To no longer to be judged by them or have them haunt me. To know that happiness is found in being totally present and at peace in this moment.

What is your greatest fear?

My greatest fear is what I believe to be anyone’s. The fear of spending my life alone with no one to love and to love me in return. A life without love just seems very lonely.

What or who is the greatest love of your life?

The greatest love of my life will always be the person behind the character of Nick Roman. He holds my soul in a way no other man ever will do so. Even after all these years, he can still take my breath away just with a smile.

What is the quality you most like in a man?

On what occasion do you lie?

Whenever the occasion calls for it. I’ve lied many, many times to protect the people I love, to include Nick. When asked if I was sorry for those lies, I can honestly say I’m not sorry and never will be. You do what you have to do, at the time, ya know. Like I said, loyalty goes a long way with me.

When and where were you happiest?

While it had to be one of the wildest times of my life, I have to say I was the happiest when I lived in New York and was dancing at the club, we called Takers. Dancing, in any form, has always been an escape for me.  I also say this time period because it’s when I met “Nick” and fell in love with him. During that time there wasn’t many, many history books between us and hurt didn’t exist.

What is your current state of mind?

What it always has been, chaos. I’m always worrying about the next thing coming and how I’m going to have to hustle once I’m there.

Who are your favorite writers?

I have several and the list is rather eclectic.

Who is your hero of fiction?

Scarlett O’Hara from Gone With the Wind. I find her character to be human and flawed. She didn’t conform to society’s standards. She did what she had to do to survive, not caring if others agreed with her decisions. She reminds me of myself, a lot.

Tell us a little bit about your release Fallen Angel: A Mafia Romance?

I believe Alisa defined the story the best in one of her interviews. She said the story is about a very flawed, very damaged young woman who doesn’t quite realize just how much she’s in over her head, until it’s almost too late. She has knack for getting involved with all the wrong men, and doesn’t know how to break away. You’ll find yourself rooting for this girl half of the time because of her spirit, because she’s been kicked around, beaten down, but never has given up. The other half of the time you just want to wring her neck and make her do right. It’s a story about the wrong and right type of love.

Can you tell us a little about your upcoming works?

“Fallen Angel is a dark, tasty appetizer with echoes of “The Sopranos.” It’s like picking up a Lindt truffle on your way out of the store. There’s just enough to wake up your taste buds, or in this case, other parts due South.” – Margo’s Red Light District

“Gritty, sexy and with a strong but vulnerable female lead. Fallen Angel is a surprisingly good read.” – Ingrid Hall

“Is Jess going to get sucked into a world with Nick that will destroy her or will she bring Nick to the other side and they find happy ever after? I will be grabbing the next book soon. I need to know more about this story and what the future holds.” – TBird, Crystals Many Reviews

“Fallen Angel is a quick and sexy read. I hope to get the chance to read the next installment. I want to know more about Nick and the dangerous games he’s playing.” – Angela, Crystals Many Reviews.

Based on events from author, Cameron Skye’s life. Where does fiction meet reality? You decide.

Fallen Angel is a mafia romance serial novel released every 4 to 6 weeks, at approximately 8000 to 11000 words each. Due to sexual content, implied and actual scenes of abuse, violence, organized crime, language and frequent illegal drug use, we recommend this to mature audiences, ages 18 and over, who are comfortable with this subject matter.

well…alisa did stuff and is still doing stuff. only now she has two boys crazy enuff to want her as their mommy. hey, at least she tried to warn them, so her job is done. she doesn’t like to capitalize, partially because she likes how lower case letters look visually, but mostly out of laziness. please don’t judge. it could be you. and she would say, hey. you’re alright, buddy. you’re ok in my book. now c’mere for a hug. the hug might be pushing it. air kiss? you are strangers, after all, with only a mutual love of poor grammar.

​she lives for a world full of controllable anatomically correct, android men programmed to meet her specific feminine needs (wink, wink, nudge, nudge with a big waggle of the eyebrows). who look like the rock. and ian somerhalder. and idris elba. and that’s it she promises. variety. gotta have variety, right?

​but alas…apparently that exists only in johanna lindsey’s genius mind. so until then, she enjoys her incredibly warped sense of humor. she reads tons of erotica and romantic, drippy goo that makes her heart go pitter patter. then she thought, hey. what, she said to herself. (softly, of course, so no one finds out she is indeed, 2 nuts short of a fruitcake) maybe you should write this stuff too. maybe someone will like it and maybe buy it. so she said, huh, you think? then she said, well…yeah, i wouldn’t have suggested it…(inserts sarcastic tone) and then she was like lose the attitude, ok? then she was all, would you just shut up and write, already? sheesh! and she did. :)

When Cameron is not in the lab working toward a Ph.D., in Neuropsychopharmacology, which in laymen’s terms is basically finding the effects drugs have on mood and behavior, she is writing stories, creating vivid, intense characters you will never forget.

She believes while life can take you down every path but the right one, eventually everyone will find their happily ever after.

It started with an arrangement, temporary, no-strings-attached sex. On a journey to find herself, Emma Daniels never expected to fall into bed with two broody men for a little dominance play. Giving up her dreams of finding the one thing she has always wanted…a family, Emma decides to embark on a month long NSA sex with brothers Ryder and Chase.
Emma finds herself falling for the hotties and wanting more, but their scarred past hinders them from giving her what she wants. Chase and Ryder Freeman have sworn off women, apart from one singular exception, sex. Meeting Emma, they never expected for her to stir those old emotions, the ones they kept buried deep inside. Determined not to give into those old feelings, they propose a compromise, one month, no strings attached. Can these three finally overcome the hurt of their past or will they succumb to it? Will Emma finally get what she always wanted by claiming her temporary men? 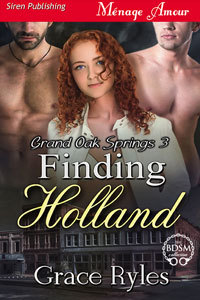 A betrayal six years ago sent Holland Mathers’s world spinning. Forcing her to flee the only place she’d ever known and the only men she’d ever loved. Vowing to move on from the past lands her in a local dungeon being manhandled by her date, Mitchel. The men who come to her rescue are none other than the objects of her desire, the men she thought she’d lost forever.

Adrian Reyes and Oliver Edwards have loved Holland ever since the day they found her on the side of the road. Their relationship lasted only six months, but that was enough for them to spend all of their time searching for her when she fled their small town, without an explanation. Knowing that without her they will never be complete, they are determined to show her that their love can overcome whatever she is hiding from them.

A chance encounter leads them to reuniting again, but things aren’t that simple. Can they find a way back into her heart and bed or will they lose her forever?